The world of men has fallen 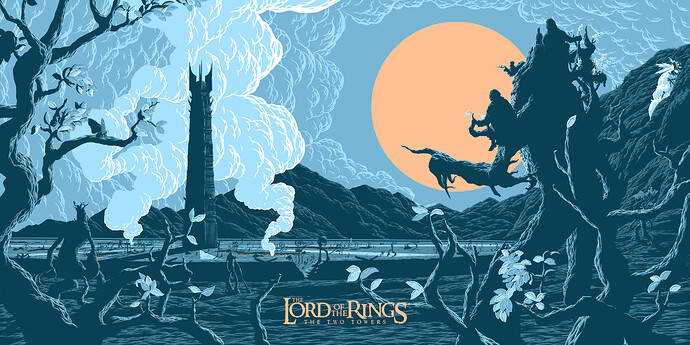 @Srceenplay Dies he was Corrupted by Saruman

You are a lesser son of greater sires

You are a double voter.

Your vote will still be displayed as a single vote during the day. Once a hammer is reached, or the day otherwise ends, your vote will be doubled in the final count. Your second vote can trigger hammers normally.

The game is over

I have a few thoughts on the setup and the game for post-game discussion. Please remember unsolicited criticism will not be accepted.

The final 4 - This situation was tricky because town was operating under incomplete information AND under normal circumstances, 2v2 would already have been game over. I don’t think anyone in the game fully understood their win condition at final 4 (even though myself and the dead chat thought it was obvious - with the benefit of full reveal). Srceenplay was the only vote that mattered, and Chesskid was the only winning vote for town because Chesskid was the only mafia who could kill Srceenplay in the night. Srceen was in a really unenviable position because he had the least information, and yet was required to make the decision.

Also at final 4, UFO tried to use his ability against Srceenplay, and correctly guessed his role - Which lead to the reveal of UFO because Srceenplay was at Helms Deep which protected him.

There was a mod error on night 2 that completely changed the outlook of the game. Laserlab targetted Srceenplay, which SHOULD have blocked Esooa’s ability. This mod error was pro town because it basically took UFOFever out of the game, however, the gameplay around it resulted in less / incorrect town information in the form of a Dunya kill which probably doesn’t happen otherwise. So it’s hard to say where the game would have gone if Srceenplay was NOT at Helms Deep. Evil successfully guessed the double voter was Theoden, so UFO would have been able to successfully day-vig him.

I think town was playing really well, all of the wagons on day 2 were on mafia, but I think Elli deserves a lot of props for the suicide job he pulled on day 2 to save his more important team, this also caused a lot of confusion. This isn’t a criticism on town since set up items are hard to read into, but I think people need to be mindful that scum is not built equal in a closed setup, and there are situations where a mafia player actually wants to die.

I think it was interesting how important Chesskid’s role was to mafia, I’m not sure if I would do this again. If I did, I would allow mafia to select their roles so that teams don’t necessarily get screwed right from the start. I think having different power levels is interesting for gameplay, it just very nearly ended in disaster D1 when Chesskid was up for town kill.

I want to experiment more with playstyle choice mechanics such as how to play Grima Wormtongue in this setup. A lot of the pre-game feedback about Grima is that he would be imbalanced, the role ended up not seeing any use, which ties into my previous point.

I think the setup is mafia favored, there were opportunities that mafia could have exploited more drastically. A fake claim on Elli + counterclaim would have been horrible for town since UFO could just shoot them. I am surprised that no one tried to exploit my threat on claims or disregard it… I’m also surprised that UFO didn’t day-vig anyone before day 4.

I was really hoping to see Aragorn at work, and I really wanted to use a “They’re taking the hobbits to Isengard” meme, so I’m a bit disappointed those characters died very quickly.

Gimli’s role actually worked really well as an investigative, I don’t think town read into it enough. Basically, Chesskid was confirmed to only ever be mafia if UFO is also mafia. So on day 3 it would have made a TON of sense mechanically to vote UFO. Of course, the incomplete information & the fact that it was last discussed mid-day 1 plays a role there.

I will be hosting another closed theme / closed setup. I’m working on playercount / balance right now.

Here is the full setup for this one:

cool setup tho StarV thanks for hosting

I’m pretty sure I completely misplayed my role, but I’m open to feedback

Gg mafia
Thanks for the game star

it just very nearly ended in disaster D1 when Chesskid was up for town kill.

lmaoooo facts oh my god. To go from 1.5 kills per day average to .5 would have been insta gg

I think it’s hard, but you probably want to somehow engage in a discussion with Orangeandblack about it so that he can clear up what it means if he dies / if he lives without you claiming.

I think even just claiming that you’re the source of the rivalry locks you in as gimli and mafia can just execute you.

StarV is my least favorite person but my favorite setup designer.

Let the dead be dead. Unless you’re exiled, then I suppose you are in the path of the dead.

Welcome to Isengard, the home base for the Forces of Evil in the west. The eye has spoken, you are to aid in Sauron’s great quest to destroy the world of men. Your assignment is to eliminate the peasants of Rohan. @chesskid3 Saruman The Wise - Modified KP holder vote stealer [SARUMANRP] Named Action - Corruption Once per night, you may corrupt another player, removing them from the game. If the target of Corruption is neighbors with Grima Wormtongue, the Corruption spell will instead act …

i’m open to any and all positive feedback

So the reason I didn’t try to kill screen earlier was because if I failed then I was told I was “revealed” but I also thought that “revealed” meant “out of the game.” Didn’t want to die and give town another chance the same day to kill Chess.

That was a really tough position for town at f4, especially for screen. Killing mafia but its the wrong mafia is always rough.