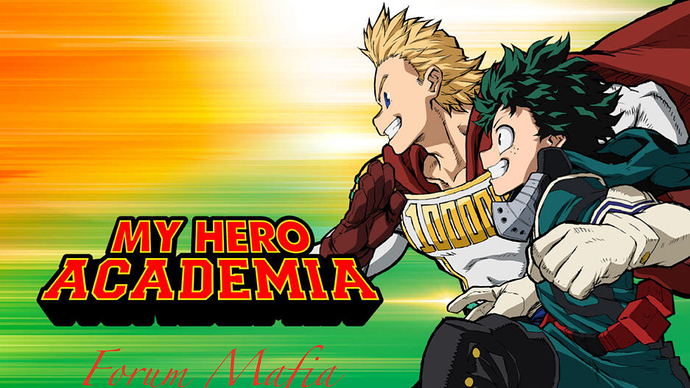 This is a 17 player closed, rolemadness setup based off the the anime series My Hero Academia. It is a very new and popular show with new episodes coming out every Saturday. It is based off of the manga series Boku no Hero Academia. It is in its fourth season totaling roughly 85 episodes. It is a lot, but in all your free time with this quarantine, why not start?

Our story takes place in modern day Japan. A few decades ago, there was a baby born that glowed. This was the start of something called a Quirk. It is like a super power that manifests when your around 4 years old. With these new super powers, people were able to do worse and worse crimes. To stop them, heroes emerged. Now roughly 80% of the population has one of these quirks. To ensure Pro Heroes keep coming back, they made an agreement with the government, and Pro Heroes get paid based on the amount of villains they take down. Because of this, schools popped up to train people to become heroes. You currently attend the most prestigious one: U.A. High School. One of the teachers here is All Might, the number one hero, our symbol of peace. A vicious villain group sprung up to kill the best hero, and all who stand in the way. Will the League of Villains have their way? Or will the young heroes of U.A. High School stay strong?

This game will use Natural Action Resolution. Actions that affect other actions will resolve first. In the case of a tie we have a priority list.

This setup was made to only reveal light spoilers. No prior knowledge is required to play this game. Please do not spoil any of the story during the game. If you have any questions, contact sulit or me through role PM are to determine if something is a spoiler or not.
Many parts of role cards including flavor and photos are taken from the MHA Wiki. They are by no means ours. Browse the wiki at your own risk. There are spoilers from the anime and manga.

This is the kinda thing I could join

But only because the hosts are cool, flavor would normally make me avoid it lol

I literally just played myself

sorry to get your hopes up

I’m coming down there this summer

Get ready for me to beat you over this transgression

ur coming to dallas lmao

Anyways remember to hit the big blue “in” button up top

Has covid taken down the great Michigan?

Has covid taken down the great Michigan?

I had three classes today

pretty sure that was to go hiking.