Lights Out: Dr. McNinja Army of One - Mafia Win 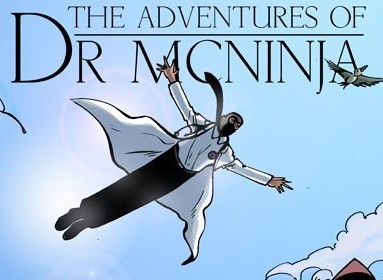 Welcome to Lights Out: Dr. McNinja Army of One

This is a setup for 8 players (6 town, 2 mafia, all vanilla) with two non-standard rules:

Ninja Scalpel (Day, Targeted, One Shot): Post “VOTE: Strike [Player Name]” (must be in bold). Each player who still has a Ninja Scalpel has 24 hours from the time of that post (or until the Day deadline, whichever is sooner) to use their Ninja Scalpel by posting “VOTE: Deflect [Targeted Player]” (must also be in bold). If no player does, the targeted player is killed. You may not target yourself with this ability (neither to kill nor to protect).

Scum can talk privately at all times.

This is my first hosted game on this site, so if you must mock my mistakes, mock gently. (I am an experienced host on MTGS, however.)

Feel free to ask any questions not addressed in the FAQ.

(Purely) for your flavor pleasure:

Dr. McNinja and Old McNinja, having been captured by Mongo, await their fate in a ninja-proof cell (well, it’s not really ninja-proof, nothing’s actually ninja-proof, but neither McNinja really feels like escaping at the moment). The door unlocks and swings open. Knickerbockers stands triumphantly in the doorway, Mongo’s hulking bulk filling the space behind him.

The two McNinjas look at each other, each trying to make sure neither gives the same smart-alec response as the other, as then they’d have to race to say jinx and someone would end up owing someone a Coke.

Mongo grabs both ninjas and carries them by the scruffs of their necks, like tiny adorable kittens, into an abandoned warehouse that’s also, completely unexpectedly, half a restaurant. As the two banter wittily, a shadowy figure appears on a balcony. It’s Frans Raynor! (dun dun duuuuuunn!) After lots of wordy word words for exposition (honestly, I don’t see why the comic even bothers; just get on with the red ink. -ed), Raynor nods at Knickerbockers, who opens a panel revealing over a hundred Dr. McNinja clones.

Go, my clones! screams Raynor. Wreak havoc on these two other yous, and avenge your clonic father! (Ok, he doesn’t really say this; I’m not nearly as good at Dr. McNinja dialogue as Christopher Hastings, but I strongly suspect that I’m not the main attraction here, so I’m trying to keep it short and sweet. -ed)

In a surprise twist (spoilers!), the ninja clones have no inclination to beat themselves up and instead turn on Raynor. But in a(nother) surprise twist (more spoilers!), Raynor reveals that, true to movie trope, now that he is one man facing an army, there’s no way he can lose. Dr. McNinja, realizing that nothing can beat a movie trope (even an army of ninjas) except for another trope, knows that the only way to beat Raynor now is to join him! (Third surprise twist! And third spoilers! Oh, was this supposed to come before the revelation?)

It is the beginning of Day 1; please commence with the joyful (and civil) killing of each other.

• You only get ONE Scalpel (Strike OR Deflect) each Day.

anyway we should just treat this like easier matroshka

Zzzz nobody hipfires we get some TRs we win

i mean the hard part is that we have to cooperate and there’s no dictator.
dictator’s are protown

problem is max 3 “lynches” per day.

What math are you doing then?

any number of deaths can occur each Day,

think about it a bit harder

no we don’t need to wait dan its matroshka

Take your advice and use it to look within

BTW, the 24 hour slow motion scalpel strike time is mostly due to MTGS having longer phases (24 hours was actually “fast”). Given the faster pace on this site, if you’d rather, I’d be fine with changing it to:

“If all other players indicate they WON’T save a target [after the target has posted at least once?], the strike resolves.”